From my song Future Knocks:

Fred Rogers, Mister Rogers, passed away this morning. Thank you for being there for me and so many others.

PITTSBURGH – Fred Rogers, who gently invited millions of children to be his neighbor as host of the public television show “Mister Rogers’ Neighborhood” for more than 30 years, died of cancer early Thursday. He was 74.

….From 1968 to 2000, Rogers, an ordained Presbyterian minister, produced the show at Pittsburgh public television station WQED. The final new episode, which was taped in December 2000, aired in August 2001, though PBS affiliates continued to air back episodes.

…Rogers composed his own songs for the show and began each episode in a set made to look like a comfortable living room, singing “It’s a beautiful day in the neighborhood,” as he donned sneakers and a zip-up cardigan.

…His message remained a simple one throughout the years, telling his viewers to love themselves and others. On each show, he would take his audience on a magical trolley ride into the Neighborhood of Make-Believe, where his puppet creations would interact with each other and adults.

…Rogers taught children how to share, how to deal with anger and even how not to fear the bathtub by assuring them they’ll never go down the drain.

…”We live in a world in which we need to share responsibility,” he said in 1994. “It’s easy to say ‘It’s not my child, not my community, not my world, not my problem.’

“Then there are those who see the need and respond. I consider those people my heroes.”

…The series remained popular through the years, including with children of baby boomers who watched the show growing up. Its ratings peaked in 1985-86 when approximately 8 percent of all U.S. households with televisions tuned in. By the 1999-2000 season, viewership had dropped to about 2.7 percent, or 3.6 million people.

One of Rogers’ red sweaters hangs in the Smithsonian Institution.

..He studied early childhood development at the University of Pittsburgh’s graduate school and consulted for decades with the late Dr. Margaret McFarland, an eminent child development expert at the university. The show examined the tribulations of childhood, including anger, fear, even a visit to the dentist.

At a ceremony marking the 25th anniversary of the show in 1993, Rogers said, “It’s not the honors and not the titles and not the power that is of ultimate importance. It’s what resides inside.”

Off the set, Rogers was much like his television persona. He swam daily, read voraciously and listened to Beethoven. He once volunteered at a state prison in Pittsburgh and helped set up a playroom there for children visiting their parents.

…Rogers is survived by his wife, Joanne, a concert pianist; two sons and two grandsons.

Robyn shares her thoughts, as will I am sure, many, many others. Forgive me for not linking to them because I’m just not weblogging the rest of the day. MetaFilter has a thread going as well.

This is Just the Day. Have a good one.

CSMonitor: Pacific Coast as a boom-bust belt. Everything changes. For so long we’ve been told the opportunity is on the West Coast. No longer.

Steve, you will like this one… 46% of all duct tape is produced by the Manco Company – a $100,000 GOP campaign contributor. Irrelevant? You decide.

For you Wal-Mart haters, a look at the good and bad of the Wal-Mart empire in Fortune Magazine. via Dane Carlson.

Looks like Internet usage made a difference in Korean politics.

Speaking of net usage making a difference, learn How Protesters Mobilized So Many and So Nimbly.

A bunch of WashingtonPost readers are pissed at the paper for revealing too much about operations in Iraq. It seems nothing can be kept a secret anymore. I’m all for investigative reporting, but why did they need to publish those details? They didn’t help the reader to better understand the conflict. They didn’t educate the reader as to the news. They didn’t expose to the reader important facts that they needed to know.

Burningbird and Scripting News continue to have the best commentary on the Google+Blogger deal.

According to Newton (yes THAT Newton) the end of the world is soon anyway. Party like it’s 1999.

A must-see website: LostLabor.com. America used to be the workshop of the world. What are we now? (I think this is via dangerousmeta).

The Grammys had it’s moments, but overall still sucked. For starters, the artists kept their mouths shut. How boring. And frightened looking. I swore you could see the uncertainty, “Should I speak, or will I get booed?” Even Springsteen played it safe.

Did you notice the expanding trend (started last year) of highlighting music that’s back to basics? They are so desperate for it they practically threw awards at Norah Jones. You could see her and John Mayer’s true surprise. Even Eminem played with musicians in the background – Philadelphia’s kick ass hip-hop band The Roots. Damn I love that song. The tribute to Run-DMC at the end was a nice touch too.

Bruce seemed to be the glue that held everything together, even if I think he could have brought the house down, and send a message, by ripping thru “Born in the USA”. The lyrics bear listening to in this day and age.

More then ever before, the category selections made no sense. Crackheads must do the category assigning. Bon Jovi for pop song? And what’s up with nominating Pink for so little? Unlike other teen pop stars, she’s growing up to be tougher and more honest lyrically, showing real growth, instead of simply showing more ass (although really, who am I to complain?).

Metal and punk, except for the Joe Strummer tribute, were non-existant. I guess that’s as it should be.

Speaking of “back to basics”, check out the Johnny Cash video of him doing Hurt. It will rip your heart out. “You can have it all… my empire of dirt.”

You can’t be in music for the money. According to the NY Daily News, your average rock star will earn $40k from a gold album.

BTW, the NYTimes has been running a series on influential musicians. This week they cover Chuck Berry.

As for me, I’ve had more then a few tuning and action issues with my new Strat which have been keeping me busy. Most of my creative time has been spent tweaking her the past few weeks. Now she plays the way I play – which is both messy and nuanced. I transition from picking softer then a feather to harder then a jackhammer – wherever the a song takes me – and that required some work to get the action just right. Otherwise I was stuck with buzzes or needing Superman’s strength to bend strings.

One thing I now know is that it’s best for you to do your own guitar set-ups. No one, except maybe people close to you, can satisfy your needs, especially on a guitar as personalized as a Strat.

In related news… if things go well, and I think they are, I might be able to go public with news of a new band. I don’t want to jinx it. Suffice to say – practices have been kicking ass. Nothing serious – just having fun. And therapy.

First the good – Mike is considering to resume blogging. I have the very same feelings about Mike’s efforts that Jonathon Delacour did. He’s a great conversation starter and will get you thinking in terms you may be uncomfortable with. He’s back on my on blogroll in anticipation of getting those controversial discussions started up again.

Wired asks Why did Google Want Blogger? while the BBC questions whether Google has grown too powerful. The NYTimes has the best summary I think.

Jeff Jarvis defends his take on “Mr. Duct Tape”.. More and more it looks like a bad episode of South Park. Well… there are no bad episodes of South Park so take that as you may…

A thing that strikes me is how we’ve squandered the world’s support after 9/11. Click the link or the image to the right and know people across the globe stood with us. The attack backfired as far as world opinion went. Now that united spirit has been fractured, maybe even lost. Whose fault is that? You decide.

Update 2/24/2003: The Washington Post decided on publishing a story on this today. How timely.

The anniversary of Daniel Pearl’s horrific murder just passed by. Read his wife’s impassioned plea to attack the real enemy. We must be intolerant to intolerance and fanatical against fanaticism. True evil lies within each.

At least 60 dead at a Great White show. I’ve gone to countless shows just like this. I’ve even played a club very similar to this. My prayers go out to them today.

What I’m about to say is for those people that listened to Great White and won’t admit it. If you always didn’t like them – then the following isn’t for you…

If you think it’s cool to question how so many could be at a Great White show these days because it’s passe, you’re an asshole.

If you want to question anything, question the pyro usage in such a small club.

Update: News coming out pretty much damns the band and/or it’s management. Looks like they’ve been using the pyro without permission. Everyone is pointing fingers.

Now if you’d like to ask how could a band such as Great White can get so many to its shows without industry support – that’s a good question! Networks of fans. Word of mouth. Many bands survive and some even thrive, on tour, without major label support, without radio airplay. And it’s not limited to just metal bands. You can find examples in all genres. Where the industry doesn’t provide, underground culture will.

Garret asked a couple days ago where this generation’s protest songs were. I’m sure they are out there, but as this NYTimes story says, with the consolidation that’s occured in the industry, chances are slim you are going to hear them. But they are being played, at shows the industry isn’t supporting, being supported by fans, thru word of mouth. 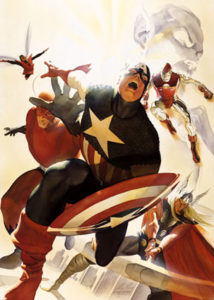 Let me urge the Dem webloggers on my blogroll to link to one another more often.

Actually – the last three already do. They cross-blog like crazy. But my associates at the top sometimes miss each other’s good works. Republicans seem more likely to link to one another. Is there proof of that somewhere? I’m just making a personal (unfounded) observation without analyzing any data. Nevertheless…

And if you are reading my site scratching your head about the sites above… well.. visit them! Not your average ordinary bears.

Acting and not acting. How, why, and when? Jonathon Delacour’s post, Consequences will get you thinking about Iraq, by sharing the viewpoint of a survivor of war-torn Japan.

Over at ThisIsCool is a build of GCC that will compile to executables Java client-side apps with SWT.

This will be a snow storm to remember. Wow!

Cringely explains how bad it is for Sun and what it needs to do to survive.