Not as difficult as you think Dave 🙂 I understand that this is a trick question, but it looks like others beat me to the punch.

Right off the top of my head:

2. I don’t know what I’ll be doing for work in ten years. Let alone, what I will be when I grow up. Then again, I might be dead.

3. I don’t know what I’ll be wearing next year. Next week is pretty iffy. Shoot, tomorrow morning is as well. Then again, well.. see number one.

4. I don’t know if I’ve been a good friend, a good brother, a good son, or a good husband. Now a good father. We never really know what others think of us. And if I was sure of what I thought of myself – I’d probably be an asshole.

5. I don’t know if the net/net contribution of my life is good or bad. I’m hoping good.

6. I don’t know if I’m spending my time as thoroughly as I can.

7. I don’t know how big my heart can get, because it just grows and grows every day I have with Emma.

(I can go on and on… couldn’t do just five… it’s a great, thought provoking question)

I wanted to take a moment, at this early hour, to wish you all, the Philadelphia community, a Merry Christmas.

This Christmas will be the most special in my life, the first Christmas for my daughter Emma. And I can’t help but share with you my love and excitement.

And I can’t help but share how blessed I feel to be part of the great team of volunteers that run this service, or to be a fellow member of our online community.

But I feel hesitant. Because in the presence of so much personal joy, outside my window, there are countless families struggling with loss. From Star’s family to the the 400 souls who have been murdered this year, to the 1,100 children who are homeless and on the streets, times are hard for all too many.

So let me take this moment, and join Carol Towarnicky at the Daily News and share my liberal Christian faith and ask you all for a prayer.

That we may all be instruments of peace, love, faith, hope, joy and understanding in this coming year. No matter what religion we may follow. No matter what label we divide ourselves by.

Scott tagged me 🙂 Okay, this is pretty hard considering all I’ve shared here over the years.

1. I spent a night in a county jail because a friend of mine lied when he told me he had permission to borrow his parent’s car. He drove us up to Connecticut to meet a girlfriend of his. Turns out he was helping her run away and that he lied to me about the whole thing. The police stopped us in a park we were hanging out in, across state lines. Me, not knowing why, was umm… more than a little stunned. I found out overnight while chatting with him in our cell. How nice. Anyway, his parents came up to pick us up. Charges were dropped. Along the way, his parents told me how much they blamed me, having the long hair, ripped jeans, and broken home, I was, well ya know, the kid from the wrong side of the tracks. Obviously to blame. They dropped me off on the side of the highway (I-95) at the Philadelphia city limit.

3. As a teenager with his own apartment, I tended to drink… a lot. I used to take hard liquor bottles (Jack Daniel’s, Southern Comfort, etc) and use them as decoration. Sad huh?

4. I thought I was going to die by the time I was 30. Glad I didn’t. In fact, you know all those folks who look back wistfully on their teenage years? Maybe you’re one of them? Not me. My teenage years and my early twenties were hell on Earth. I’m happier now then I’ve ever been.

5. Know that scene in Return of the Jedi with Luke looking at his gloved robotic hand after severing Darth Vader’s? That’s Luke realizing he’s on a path that mirrors his father’s. The father he never knew. It shocks him just enough to come out of his rage and throw his saber to the ground. I carry a fear that life works that way. And since I don’t know my father – I don’t have that knowledge as a clue to what I am evolving into. Hopefully it’s good.

The following comic says a lot, doesn’t it? 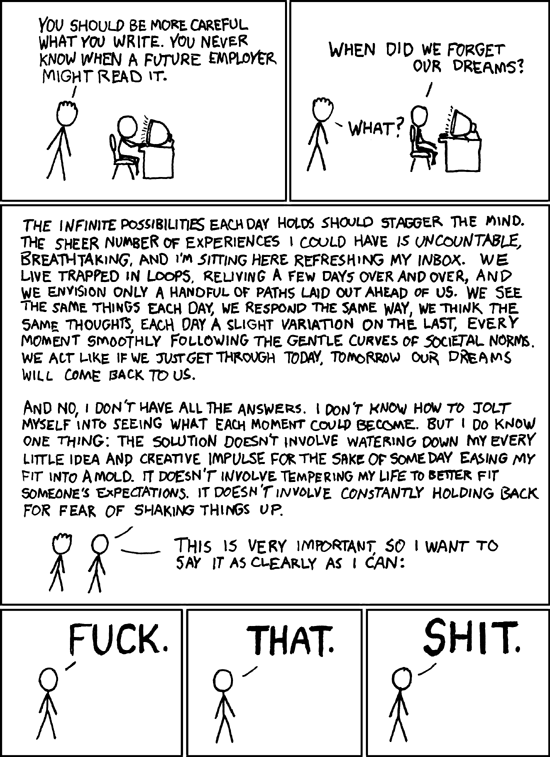 The Philadelphia region is less one terrific soul this morning – Star C. Foster, 33, as died of a sudden pulmonary embolism. More at Philly Future.

I spend too much time following too many people online – I always ment to get to know Star better. I have her blog, her interactive fiction, and her pictures for that, but it’s not the same.

She will be missed by many across this region, and indeed, across the world.